Order today
for delivery the day after tomorrow

Everything about the Apple iPhone 12 256GB White

Average scores of the Apple iPhone 12:

The Apple iPhone 12 is one of four devices presented by Apple in September 2020. It is the successor to the popular iPhone 11 and has been given a completely new design since the launch of the original iPhone X in 2017. The 6.1-inch LCD screen has been replaced by a display with oled technology, where the different sensors to use Face ID facial recognition are still in the same place.

Besides that, the two cameras on the back have received a minor upgrade and the A13 processor has been exchanged for the new A14 processor. Charging the iPhone 12 can be done very quickly via a Lightning cable, but can also be done wirelessly. The iPhone 12 comes with iOS14, which is Apple's latest software.

Oled display with a smaller notch

The appearance of the iPhone 12 display hasn't changed much, only the notch has become slightly smaller, creating more space for the display. The underlying technology, on the other hand, has been tinkered with quite a bit. The LCD screen has been replaced by an oled panel, which is good news. The display shows colours beautifully and is nice and bright in the sun.

Double lens on the back

Apple has made a number of improvements in the area of cameras and you can see this in the quality of the photos. There are two cameras on the back, both with a 12-megapixel sensor. The second camera has an ultra-wide-angle lens, with which you can capture a wider image. This is ideal for taking a group photos.

The front camera is incorporated in the notch of the screen and also has a 12-megapixel sensor. The portrait mode in iOS has been further improved and takes even better photos.

The iPhone 12 Black is equipped with the new A14 chip. This processor is designed by Apple and allows you to use all apps and games at lightning speed. The A14 is not only faster than its predecessor, but also a lot more energy efficient. So your new iPhone will last even longer!

The iPhone 12 also has Apple's facial recognition sensors. These sensors are located in the notch of the screen and they are smaller this year than before. Face-ID works super fast and is also one of the most secure ways to lock your phone.

The iPhone 12 is equipped with the latest version of iOS. There have been quite a few changes in this release. It is now possible to add widgets to your home screen, and many of the standard Apple apps have been given a new look. One thing is for sure; iOS remains one of the most user-friendly mobile platforms.

As for materials, Apple has chosen to exchange glass for a metal back. The edges of the device are angled and the glass back of the iPhone 11 has made way for metal. This design gives the iPhone 12 a premium look.

The user manual is not included but can be downloaded or viewed here: Online user manual.

The Apple iPhone 12 256GB White does not come with a charger. Check whether you have a compatible charger at home. Or order a charger.

With normal use, we guarantee that your phone will work properly throughout the full warranty period. If something goes wrong, Gomibo.ie and Apple will make sure to help you out!

How do repairs at Apple work?

Show all accessories for the Apple iPhone 12 256GB White

Accessories that go with the Apple iPhone 12 256GB White

Show all accessories for the Apple iPhone 12 256GB White 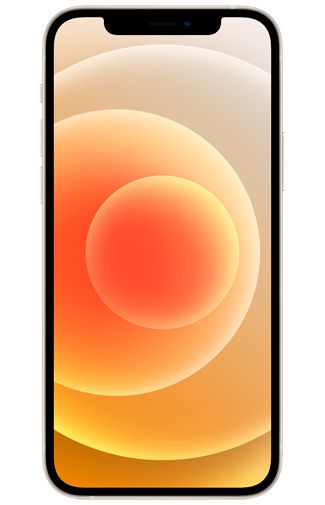