Order before 19:00
for delivery on Monday

Everything about the Apple iPhone 7 128GB Silver

Average scores of the Apple iPhone 7:

The Apple iPhone 7 128GB Silver is the successor of the popular iPhone 6S. This sleek, modern, and powerful handset has all the features you could want from a modern smartphone. The iPhone 7 features a fingerprint scanner for unlocking your phone and it runs on iOS 10 straight out of the box. The screen is a semi-compact 4.7 inches and provides you with bright and vivid images. At the bottom of the screen, you'll find the familiar home button, which has a fingerprint scanner and is now touch-activated instead of being activated by pressing the button. The Apple A10 Fusion chip keeps the phone up to speed so you can play even the most graphically demanding games with ease. With its larger battery, the iPhone 7 can also be enjoyed for longer periods than the iPhone 6S.

Making calls in the rain

One of the most important developments for Apple is the waterproof casing of the Apple iPhone 7 128GB Silver. This makes the iPhone 7 the first iPhone that you can use to make calls in the rain! In its appearance, the iPhone 7 varies slightly from the iPhone 6S. The antenna lines have been moved, the seams have been removed and the home button has become touch-activated. The screen now also features 3D Touch. This feature makes the screen capable of recognising three different pressure levels. Touching the screen as usual still elicits the same response, but if you touch the screen only lightly, a preview will appear of whatever you're touching. Pressing harder will open the preview of the app or file. This lets you switch between files and apps even faster than before.

The Apple iPhone 7 128GB Silver has a magnificent camera. The main camera on the back has 12 megapixels and takes great pictures even in low light-conditions. This is because Apple has improved the light sensor by making it larger so it can capture more light. Special moments won't be spoiled ever again by a bright flash. The front camera has 7 megapixels and now takes even better selfies. Making video calls with FaceTime is also more fun thanks to better quality video streaming. The iPhone 7 also boasts amazing sound quality! As Apple has removed the 3.5mm headphone jack, space was freed up for an extra speaker. And you don't have to worry about your headphones, as you can connect them to the lightning connector that you use to charge your phone. Non-compatible headphones can also still be used; simply connect your headphones via the adapter that Apple has provided.

The user manual is not included but can be downloaded or viewed here: Online user manual.

With normal use, we guarantee that your phone will work properly throughout the full warranty period. If something goes wrong, Gomibo.ie and Apple will make sure to help you out!

How do repairs at Apple work?

Show all accessories for the Apple iPhone 7 128GB Silver

Accessories that go with the Apple iPhone 7 128GB Silver

Show all accessories for the Apple iPhone 7 128GB Silver 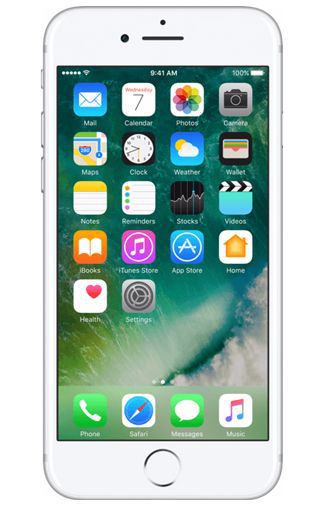