No reviews yet
Online: In stock: Order before 19:00 for next-day delivery

Everything about the Maxcom MM825 Black

Description of the Maxcom MM825 Black

The Maxcom MM825 is a folding phone without Android, but still with a number of modern features. The most striking feature is that this phone has two displays! Besides the main screen on the inside, there is also a display on the outside.

Besides the normal functions of calling and texting, the Maxcom MM825 also makes use of bluetooth and mobile internet via 2G. Furthermore, the MM825 has an FM tuner with which you can listen to the radio. Included is a desk charger, into which you can easily click your phone.

The Maxcom MM825 does have a number of modern features, but a lot of unnecessary functions have been left out compared to a smartphone. This makes the phone very easy to use! The menus are much tidier and therefore clearer.

The Maxcom MM825 has nice big and illuminated buttons, making it hard to miss. There is also an SOS button on the bottom of this folding phone, which puts you in touch with pre-set telephone numbers in no time. Handy!

The Maxcom MM825 has room for an extra SIM card, so you can use two different phone numbers. Instead of dual SIM, it is also possible to use a micro SD card up to 32GB, for extra storage space. That's handy if you use the built-in camera a lot!

Accessories that go with the Maxcom MM825 Black

Show all accessories for the Maxcom MM825 Black 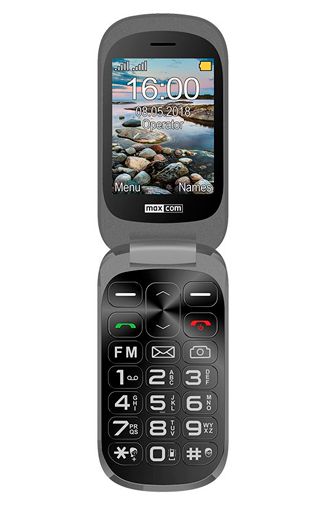