EU sourced phones will have a full warranty and are compatible with all IE & UK networks.

Order before 19:00
for delivery on Friday

Everything about the Samsung Galaxy Z Fold 3 256GB Silver

Besides the large screen on the inside, this foldable smartphone has a lot more to offer. It has, for example, the fast Snapdragon 888 processor and a total of five cameras! There are also handy features like NFC and wireless charging.

Foldable screen on the inside

The Galaxy Z Fold 3 is a foldable phone with a large 7.6-inch screen on the inside. This screen uses AMOLED technology to produce vivid colours and refreshes itself 120 times per second for a smooth transition between images.

This large screen is great for multitasking, and you can do this extra efficiently by using an S-Pen. The AMOLED screen on the front has a diagonal of 6.2 inches, you can use this screen for quick tasks such as viewing notifications, sending messages and controlling your music.

The Galaxy Z Fold 3's processor is powerful enough for all the apps and games that you want to run. This Snapdragon 888 chip ensures that you will no longer experience any hitches or long waiting times. It also makes sure you can multitask smoothly!

The Z Fold 3 not only has a camera on the rear, but also one in both screens so you can take a photo or selfie in any position. The camera module on the back includes three lenses: a main lens, an ultra-wide-angle lens and a telephoto lens for 2x optical zoom.

Both screens have a selfie camera with a punch-hole design. This means the cameras don't bother you and you can take a selfie when folded or unfolded!

Use your phone as a wireless charger

The battery of this Galaxy Z Fold 3 has a capacity of 4400mAh, making it last all day. Besides fast charging and wireless charging, this battery has a very useful function: reverse wireless charging. This allows you to charge your earbuds or another phone wirelessly with the Z Fold 3!

Samsung has made sure that the foldable phones have also received a watertightness certificate this time. Thanks to its IPX8 certification, the Z Fold 3 is highly resistant to water, even if you submerge it! The screens use Gorilla Glass Victus which makes them scratch resistant and extra sturdy.

The Samsung Galaxy Z Fold 3 256GB Silver does not come with a charger. Check whether you have a compatible charger at home. Or order a charger. 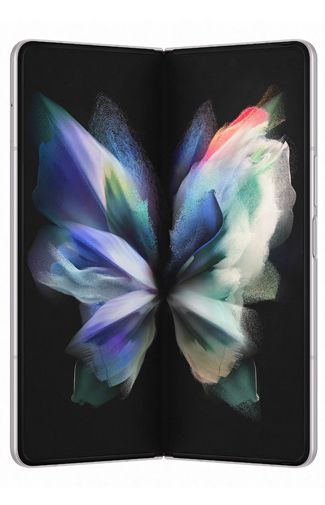