Order today
for delivery the day after tomorrow

Everything about the Samsung Galaxy Z Flip 3 256GB Black

As part of the Unpacked event in August 2021, Samsung presented two new series of foldable phones, including this Samsung Galaxy Z Flip 3 256GB Black. The Z Flip 3 is the successor to the original Z Flip and follows much the same design philosophy.

This foldable phone has a beautiful 6.7-inch AMOLED screen on the inside that refreshes itself 120 times per second. The Z Flip 3 is powered by the Snapdragon 888 chip combined with 8GB of ram. It has two cameras on the back and an extra screen on the outside.

The Galaxy Z Flip 3 has a beautiful 6.7-inch AMOLED screen on the inside. This screen is bendable in the middle so that you can just open and close the phone without breaking the screen. Thanks to the 120Hz refresh rate, images flow smoothly into each other.

On the outside of the phone, we find another small screen next to the cameras. This screen is mainly meant to show information such as messages and notifications, but because it is a touchscreen, you can also control your music via this screen.

Fast performance thanks to Snapdragon 888 processor

This Galaxy Z Flip 3 black is a true powerhouse because it is equipped with the Snapdragon 888 chipset. This processor is powerful enough to run all the apps and games smoothly without long waiting times. The chip also makes it possible to connect to the fast 5G network!

Two cameras with a screen on the rear

On the rear of this Galaxy Z Flip 3, we find two camera lenses with a small screen next to them. Thanks to this little screen, you can also use the cameras on the back to film or photograph yourself! You can see exactly what your picture will look like on the screen.

The cameras of this phone consist of a 12 megapixel main lens and a 12 megapixel ultra-wide-angle lens. Both cameras take great pictures and the main lens also takes very stable videos thanks to the optical image stabilisation.

The original Z Flip had a few bugs here and there, but they have been completely ironed out with this Flip 3! The housing is made of reinforced aluminium, the screen is more scratch-free and the phone is waterproof. The hinges have also been improved.

You can charge the 3300mAh battery of this Galaxy Z Flip 3 via a cable or via a wireless QI charger. You can also use Wireless Powershare to charge other devices wirelessly with your Z Flip 3! Very handy when your wireless eabuds are, for example, out of power in the train.

The Samsung Galaxy Z Flip 3 256GB Black does not come with a charger. Check whether you have a compatible charger at home. Or order a charger. 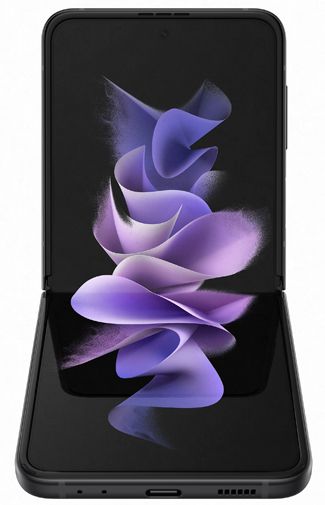